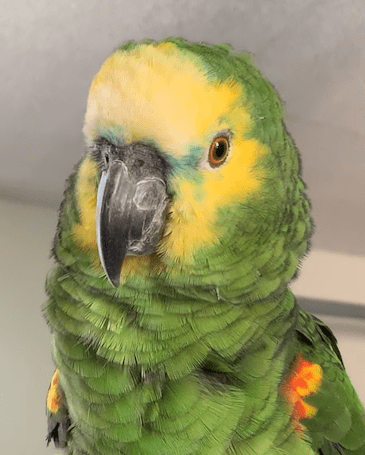 Rocko is a special needs blue fronted amazon looking for a special family to call its own. He’s missing the tendon that goes from the head to the neck so he has trouble keeping his head up. That makes him a bit clumsy inside the cage reason why we prefer a smaller size cage with a top playstand as he loves being out of the cage. When he’s out of the cage, he lits up and you can see in the pictures how he manages to hold his head up and even accept treats and food from me. Sadly, this baby was thrown inside a box from a woman driving a truck and a friend that saw it happening (and thinking it was a kitten) proceeded to open the box and there was frightened young Rocko. My friend kept him for some months and thought he couldn’t vocalize but after being here some months around other parrots and feeling safe, he started vocalizing occasionally which was music to our hearts. We’d prefer him to be an only fid but not mandatory. We just want someone with a huge huge heart willing to work with him for him to trust even more and be as happy as can be. So far he’s doing fantastic but we got to the point that he’d definitely benefit from the undivided attention from his own family to continue thriving. Besides that missing tendon, his health is excellent and is in great feathers. His vet records are with Dr. Clubb. If you think you can open your heart ❤️ to this special baby, don’t hesitate to fill an adoption application. 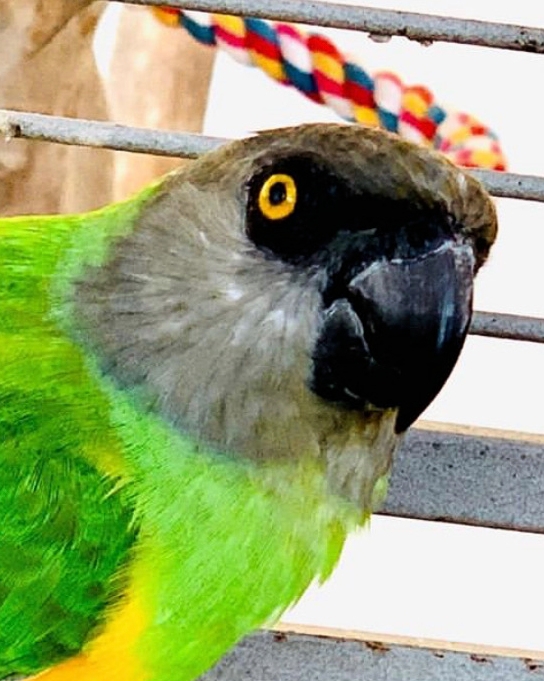 Bennie the Sennie is about 10-11 yrs old super calm #senegalparrot . When he came here the first time, I was advised nobody had ever heard him make a single noise and that he was blind and could only see shadows. Bennie is a great example of what a healthy organic raw nutrition does for them. He was lacking vitamins and I was asked to give him Vit A among others but I chose to provide him those vitamins though veggies. It worked!!! He’s no longer blind and moves all over his cage (no longer needs a special needs cage), plays with his toys and sings beautifully. He doesn’t favor being handled and may take a long time to trust again as he was found malnourished and being poked on a small cage at a flea market. A good friend couldn’t stand it and payed them 350.00 just to take it away from them. Thanks to this good friend rescuing him and the care we were able to provide, he’s now thriving and ready for his new forever home. Whoever adopts Bennie, must know and practice healthy nutrition for parrots as we need continuation to what has benefited him so much. He still has some trust issues but we’re hoping to find a home with a calm environment where the owner can win his trust. It can happen if patience and love are involved. ? We’ve worked really hard and consistently with him so we hope for a really committed new owner. We will adopt him with his cage and all the toys he’s already used to. It took him a while to even trust the toys so we think it’s best if his setting remains the same. 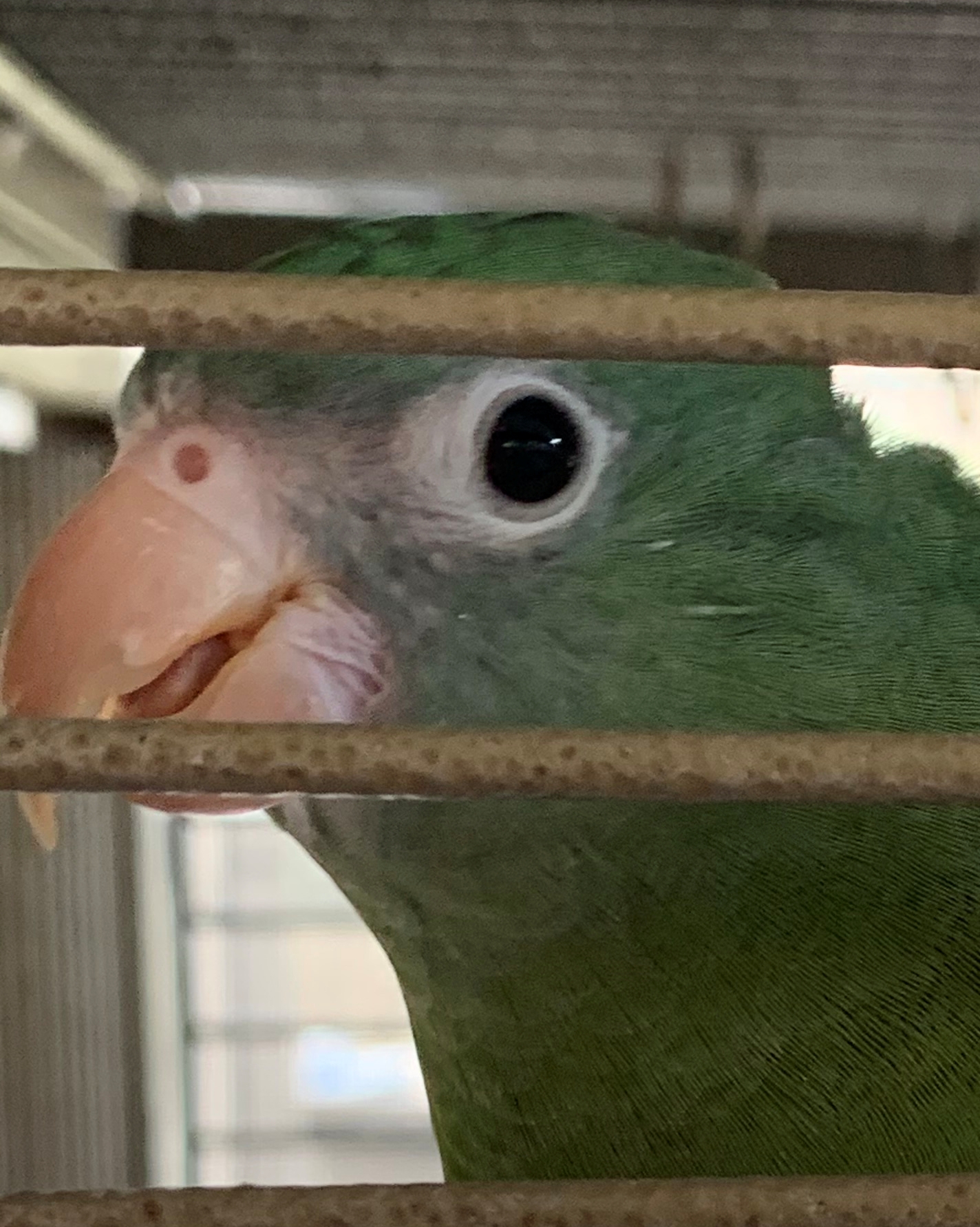 Sprite the whitewinged parakeet is looking for a forever home. She’s not tame but a total goofy clown that would love to hopefully find a home with another bebe parrot. 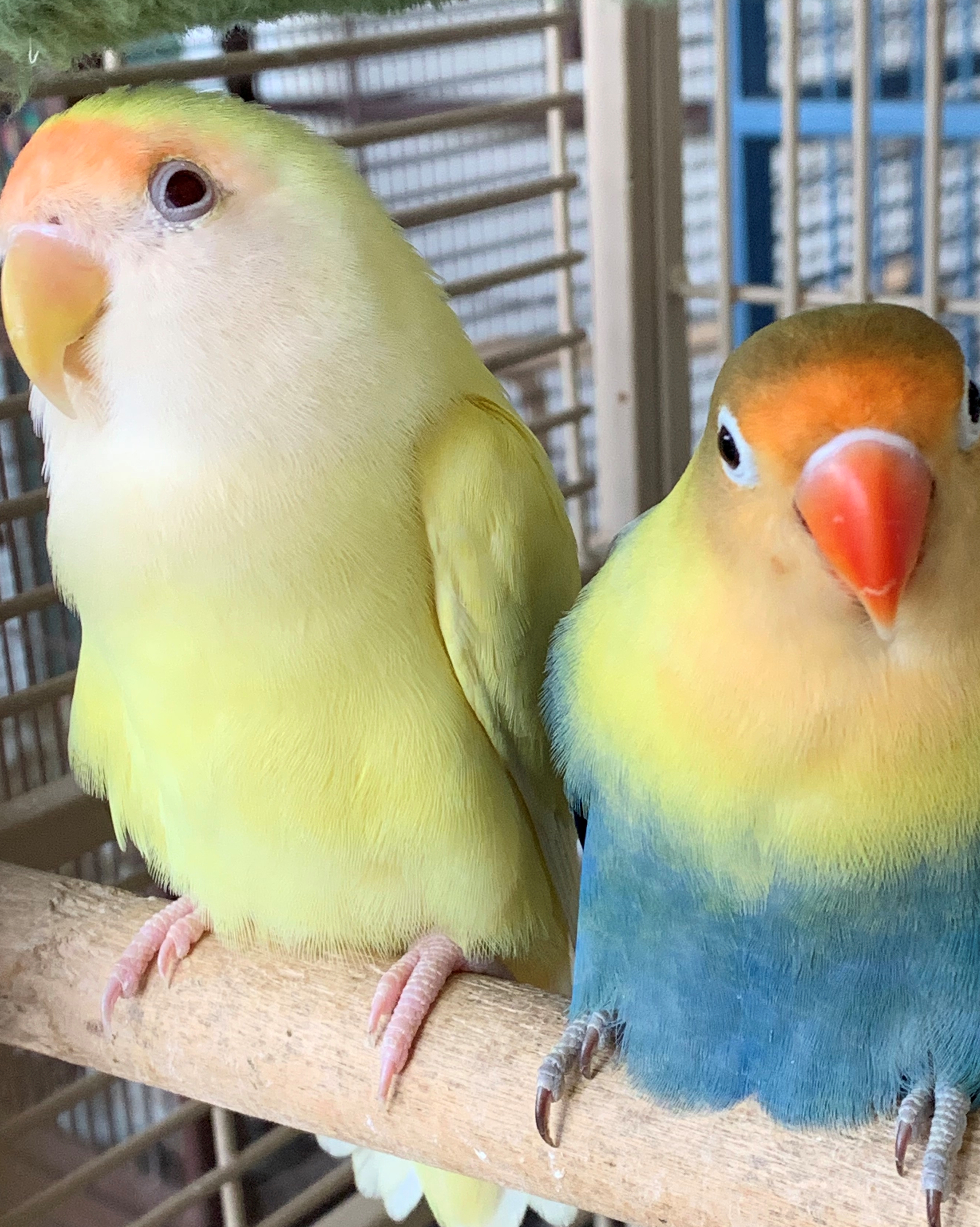 Jess and Blu are really beautiful lovebirds with awesome coloring looking for their forever home. They’re not tame however they’re beautiful to watch and so relaxing. They’re bonded and loves their hit’s to sleep in. 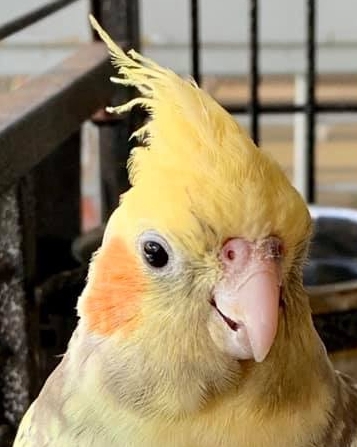 Puff Puff is a special needs bird available for adoption. She only have one working leg but managed like a pro. She even finds comical ways way to enjoy her meal (see third picture). I’d love to find her a home where she can be either alone or with another cockatiel close to her. Friendly birds are also welcomed to be close by. 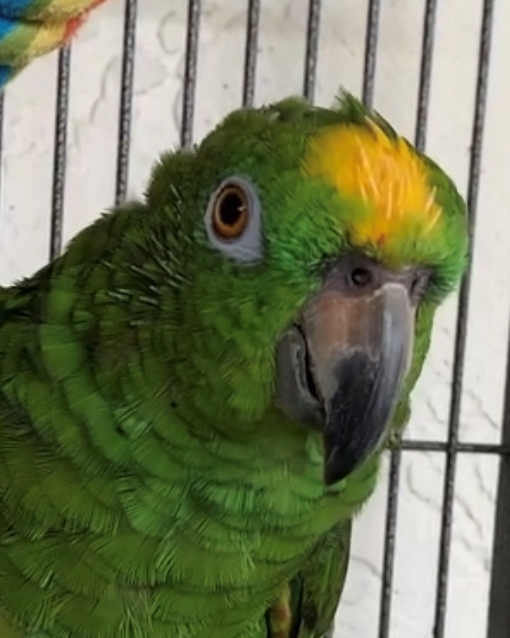 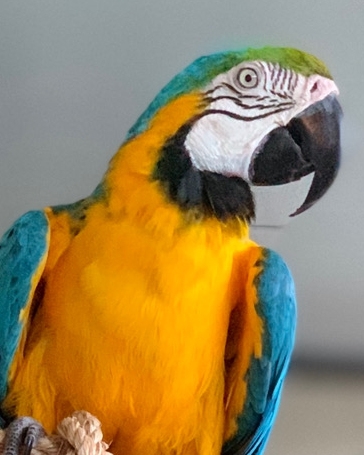 Buddy is a 20 yrs old macaw that’s came a long way. His owner passed and the widow had severe mental issues so he suffered from neglect as well as a raccoon attack until we rescued him. He’s been fully vetted by Dr Clubb and we fought clostridium and a big booboo by his spine that healed completely. His tail feathers are growing more every day and he’s absolutely in great health. Although his handler was a male, I’ve had no problems handing him. He’s food driven so get ready for him to learn all your names like he learned ours every time you go to the kitchen. He’d make crying noises, laughing noises and will say come here until you give him something to eat. He loves his zupreem medium pellets but he also eats chop and sprouts well (with a few zupreem mixed up). He’s pretty much a perch potato so it’s the kind of macaw that will stay in the playstand without trying to come down and eat your doors ? but he’d throw a few pellets to your doggies and say “get it, get it” occasionally. Great loving funny companion for the right family. We just want to find a perfect home that he can call his own and that are fully committed to a lifetime relationship.